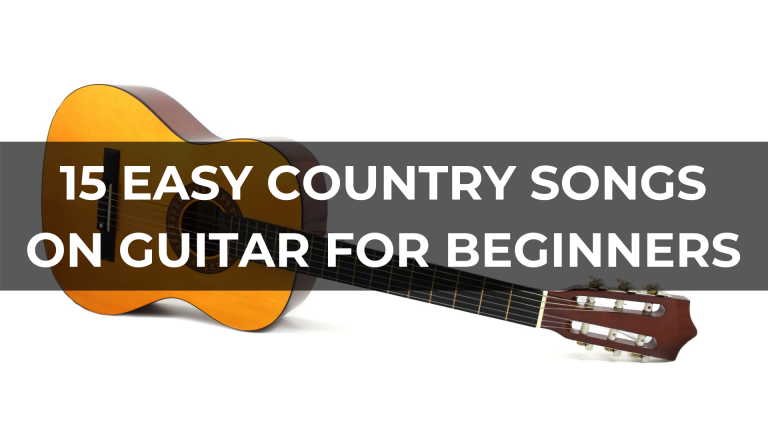 Guitars are such important parts of any country song, making them great picks for aspiring guitarists to being with. And they are suitable for all moods, whether it’s a lazy nap day or a campfire. If country songs are your thing, below are some easy and peppy picks with mostly 3-4 chords each. You can always add additional notes once you get the basics right

List of 15 Easy Country Songs on Guitar for Beginners

The original chorus and melody were written and played by Bob Dylan in 1973 and verses were later added by Ketch Secor of Old Crow Medicine Show and has been covered by several artists subsequently and played in shows and venues so frequently that requests had to be banned at one point. Darius Rucker’s version was platinum for 8 weeks!

along with the tune and rhythm, it is easy to play the entire song in the above four chords

Hurricane was the debut single of Luke combs, was a hot hit and the storyline compares the singer’s ex and with a natural disaster. The contemporary country song also has elements of rock and ballad which add to the appeal for the younger generations

It is a mix of the new school and 90s with electronic beats. If u are a beginner u want to focus on trying to get the chords sounding as clear as possible and while keeping the steady rhythm

This song came around the same time as a hurricane in the album that launched his career.the song is close to a ballad. The song is very easy to learn, it has almost the same chord pattern and progression as a hurricane but with a different tempo.

A summer song by the duo ‘Florida Georgia Line’ (Brian Kelley and Tyler Hubbard) is a fun song to learn for beginners, again with four chords and is often credited for the rise of “bro-country” style songs. The duo was best known for their musical creations that integrate elements of electronica, hard rock, and hip-hop whose jist you will get in this song as well.

The song is in the mid tempo in the key of b flat major with a main chord pattern of Bb,

Chords to try for a beginner: E, B,c sharp minor, A using the track method

Or you can simply use  G, C, D, E minor for the verses

written by Mike Reid and Craig Wiseman is Known for its storyline of subtle emotions and sadness, the song has a slow tempo but a nice change in the chorus. Also, you’ll only need to learn three chords to pull it off.

6. Okie from muskogee by Merle Haggard

No better way to start off learning country songs than this one.One of the genre’s most popular and most successful country singles ever. It is the perfect song for beginner guitarists as it only has two chords. It has a very lovely melody and a lyrical story to go with

Okie is slang for Oklahoma, written by haggard to remember soldiers from Vietnam var and reminiscing the good old days of music. Was also credited with ‘single of the year’ in 1970

7. Ring of Fire by Johnny cash

Considered in the list of the best country songs to ever exist, it is a very short song making it easy for the ultimate beginner and will be a great lesson for finger coordination and strumming techniques. Ring of fire in the song’s context means “falling in love” according to the co-writer June Carter Cash

It is one of the superstars’ most popular songs. Although the song itself didn’t win one (nominated twice), the Pentatonix won a Grammy for the performance of this song, four decades after the song was released! (in 2016).

Strumming in this song needs a little more attention than normal but it is a very easy and joyous piece to learn. Putting a capo on the 5th fret will help u increase the pitch though not mandatory.

9. Boys ‘round here by Blake Shelton

This song is a celebration of the southern lifestyle, is a favourite dance number requested regularly in the clubs. The entire song is in the key of major A and a chord pattern of A- D and is a collaboration of several artist associates in Shelton’s life and sold around 2.5 million copies

With two Grammys to its credit, it is such a popular cowboy song experience. It is a western ballad that remains to be tony robbin’s best-known song but is considered a classic for its tragic narrative

It is impossible to imagine a country music playground without this song which also happens to be the state song of Louisiana. It is perhaps the first musical piece learnt by many guitarists because of its immense popularity and simple structure and interestingly,  holds a place at the grammy wall of fame

the song is about a young lad bobby with economic issues who is an aspiring singer and musician whose community advise him to choose something normal and realistic. This 1990 song perfectly delivers bobby’s and honestly every person’s inner message “I will be somebody and prove them all wrong”

With an excellent tone structure and pleasant melody and modest melody, it’s an obvious pick for a beginner.

Originally recorded by David Allan Coe in 1981 as a traditional country style song. Stapleton’s rock and soul added version appear in the midnight sky(2020). Interestingly, the song was written in 1981 by Dean Dillon and Linda Hargrove apparently at 4 am on the day they met, at a cafe in Nashville.

Place a capo on the second fret, it’ll make the melody easier to play

The undeniable magic of this song will be evident with just the intro of the song Somebody Like You is set in common time in the key of E major. The verses use a chord pattern of E-A-E-B-A-E although the tempo is a little fast. packed with Keith’s characteristic vocals and a catchy rhythm, it surely makes everyone groove to this song instantly

Whatever genre’ of music you chose to play, it is very important to learn the chords properly and practice the techniques well (strumming or fingerpicking ). Hope you have fun learning the above songs and be sure to try more complex ways of playing the original melody. Until then, Happy learning!

P.S: The chords mentioned for all songs are not all original, they are just meant for beginner learnings