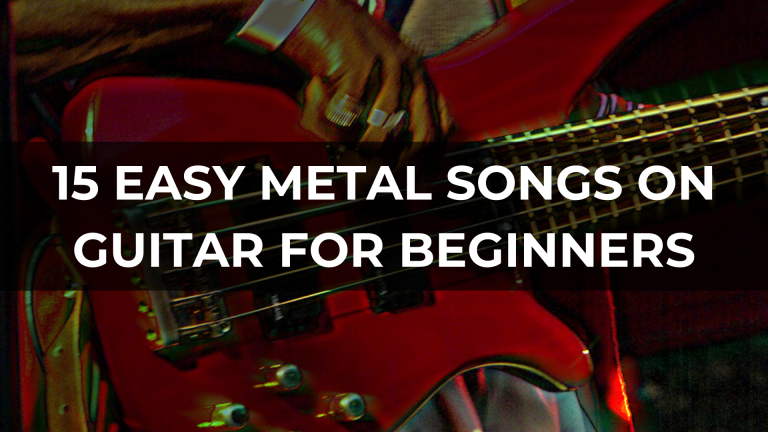 Metal songs are definitely not meant to be the starting point of a beginner guitarist. Heavy metal songs are often difficult to play, for even the moderately experienced ones.

They will test your fingerplay skills and operate in high speeds and can be unforgiving on your fingers. Having established that, if metal songs are your pick after having learnt the basic chords or is the new genre you want to master, below are some easy suggestions you could start with

List of 15 Easy Metal Songs on Guitar For Beginners

1. Living After Midnight by Judas Priest

This is a legendary song released in 1980 by one of the first heavy metal bands that are still active today, Judas Priest. Many of their songs are among the easiest heavy metal songs to start with for guitar beginners, and Living After Midnight surely is among the top of those.

The song speaks to the hedonistic, rebellious spirit of the late 1970s and early 1980s, and is among the band’s most popular songs. The song title inspired was by the band member’s loud playing at 4 am.

2. Ace of Spades by Motorhead

Motörhead could be categorized more aptly as a speed than heavy metal. It is great for gaining speed coordination in your left hand. At 280 beats per minute, you’ll find yourself furiously playing every note of this 1980 Motorhead classic. It is an exercise in futility for many beginner guitarists who have lightweight guitars.

Conquering the fingerbone-breaking fingerpicks and executing this piece just like Lemmy will be an absolute feat to achieve for even experienced pro-guitarists.

The intro is simple. However, it’s the tempo that can be unforgiving. Getting the rhythm right is crucial. Playing the guitar starting on the 12th fret will need a ton of practice. It’s not convenient and definitely not easy. But it’s what makes this song unique and a must try for every metal fan

Of course, the godfathers of metal-the Black Sabbath’s song had to be on the list and this song is also amongst the easiest heavy metal songs to play on guitar. With one of the easiest songs to play on guitar, the Iron Man comes from the 1970 album-Paranoid. The song is quite slow with repetitive riffs but rather diverse, hence interesting to play.

The story talks about a man who sees the future apocalypse but isn’t believed and made fun of .so he causes an apocalypse like his vision to revenge on mankind. Tony stark( of marvel) can be seen wearing a Sabbath T-shirt in the films and it has been mentioned in the end credits of the first and second films but has no direct connection whatsoever

This song comes from Dio’s debut album released in 1983, which was acclaimed as their most successful attempt. This song is a staple heavy metal and is great for beginners to practice triplets and get an introduction to power chords, and also, there are no complicated solos there.

This song is often attributed as Ronnie James’s tenure’s best effort for the genre that has been part of the sabbath, rainbow and DIO.This song and the album often appear on the lists of music experts and metal enthusiasts.

5. Denim and Leather by Saxon

A song from a classic heavy metal album of the 80s of the same name, which precisely describes metalheads’ attire of that time -denim and a leather biker jacket.

As for the playing part, except for the solo that might be a little concerning for the beginners, this is a rather easy heavy metal pick to play on guitar. The entire album was received rather positively by critics for its variety of topics in a single album

6. Am I Evil by Diamond Head

Although this song is today more recognizable as Metallica’s song it was actually released twice by British heavy metal band Diamond Head and remains to be their preferred song for live shows. The tricky part of this song is hidden in the arpeggios, but they are kind of basic, and a good thing to learn for a beginner.

This famous song is a signature song and the first single of Ozzy Osbourne as a solo artist after being removed from the Black Sabbath. It is a great and rather easy song, good for practising both minor and major riffs. This 1980 heavy metal song not only performed well in the charts, it was also termed one of the 40 greatest heavy metal songs.

One of the best things about Crazy Train is its iconic guitar riff. While riffs are more popular in rock and roll songs, this heavy metal piece also has plenty of licks. Beginner guitarists will have plenty of riffs to include in their range of guitar licks. With the help of a guitar amp, it will be a deadly combo too

8. Breaking the Law by Judas Priest

The lyrics tell the tale of a frustrated man hitting the rock bottom and turning to crime for survival. The song was later covered by motorhead as the title track for their album Under Cover

Another better-known single by Judas Priest, many people think of it as being one of the easiest heavy metal songs to play on guitar. Even though it is not complex, it surely is one of the most popular metal songs, recognized readily by its opening guitar riffs

9. Fear of the Dark by Iron Maiden

Heavy metal would not have gone far without this legendary band. So here is an easy heavy metal song you must try on guitar from them. There are three guitars in the band so you can choose whichever one is easier for you to play, if you may want to skip tricky solos as a beginner.

The song was written by the band founder Steve Harris who was apparently afraid of the dark and has been sung on almost every live show of the band since its release. It has been covered by several artists and adapted for console video games and widely sung by the audience everywhere in their gigs; sometimes louder than the band members!

Another exciting heavy metal song to take your palm muting skills to the next level. And if you’re not yet familiar with this technique, this 1983 Scorpions signature song will teach you how. This song is a combination of glam metal, heavy metal and hard rock.

The secret of playing this mind-boggling song is to play power chords with precision, then executing this song’s guitar riff is a piece of cake.

The riffs of the song are memorable. It is very captivating and is exactly what you need to learn the ropes of heavy metal guitar playing.

Paranoid is a song released on Paranoid album in 1970, and is one of the best and probably the most famous Black Sabbath song. So, apart from being the “blueprint of metal”, Paranoid is also very easy to learn on guitar.

An interesting fact about the song is it doesn’t include the word paranoid and was recorded in three days as a 2-3 minute filler song but went on to become a legendary song and has been humorously requested by fans from other bands that have different genres and style.

Considered as a great influence on black metal (with their album Black Metal), Venom is an NWOBHM band. This is a rather easy song especially because there are no complicated solos. speed, catchy speed, rhythmic explosions and cutting riffs

The song tells the deeds and crimes of the Hungarian Countess Elizabeth Báthory, the most prolific female murderer who tortured and killed hundreds of young girls and women between 1590 and 1610 in order to sustain her youth.

13. Smoke on the Water by Deep Purple

Music-lovers think of Deep Purple’s Ritchie Blackmore as a musical genius who could write fantastic compositions and also play them effortlessly. Not only is he a phenomenal guitarist, but he is also a magical songwriter. That’s what you get when you play Smoke on the Water.

Known for its use of an ingenious 4-note blues scale, this 1971 song remains one of the most iconic pieces of the genre to ever exist. The bass-laden riff is perfect for beginners (including the 3/4 guitar players) as no complicated finger styles are needed. Mastering the basics is often enough to play this song like a rock star.

Comprising of only seven chords, Back in Black should be an easy one to master. That is if you are only content with playing the basic strumming technique. This 1980 song has elements of heavy metal and hard rock that appeals to fans of both genres.

The fingerplay on the fretboard can also be quite difficult for absolute beginners with small hands. The riffs also require plenty of sliding and bending. You can learn this song if you focus enough on the basics of the musical piece.

15. The trooper by maiden

The rhythm of this 1983 heavy metal song is one of the musical piece’s most compelling characteristics. It has a very different rhythm from the usual upbeat rhythm of most metal bands of the 1980s. Adrian Smith and Dave Murray’s harmonized guitar lead riff put so much colour into the song’s groovy .