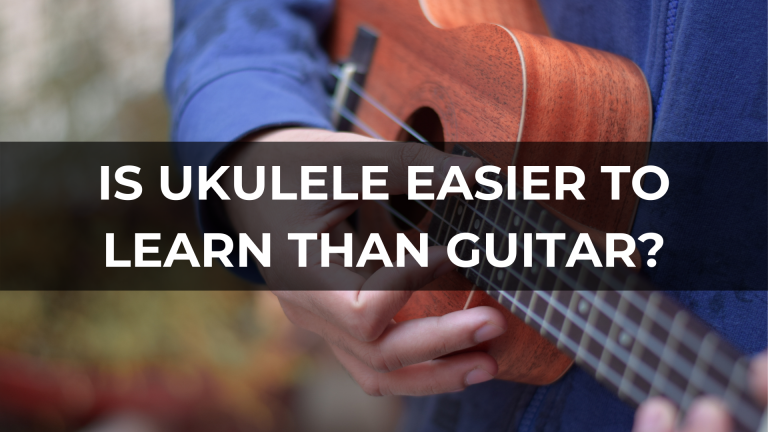 Is learning to play ukulele as easy as the guitar or it is just one of the myths people believe in? Let’s get the bottom of whether learning, owning, and playing ukulele is easier than guitar or not, and finally give you the awareness you’re on the lookout for.

But before we get started, it’s important to understand what exactly a ukulele is or you may come unglued.

Let’s begin, shall we?

Should I call it oo-koo-leh-leh or you-koo-lay-lee? Well, we’ll decide that later. Let’s first get our head around the definition to see what it actually means.

A ukulele—whose place of origin is considered Hawaii— is a 4-string instrument that can be held into hands and played like a guitar. Although it looks like a guitar, there are things that make it stand out from a guitar, especially the size. Ukulele was invented in the 1990s and is considered to be a member of the lute family. Habitually, people only talk about three types of ukuleles, namely Concert, Tenor, and Baritone.

If you’ve seen Jake Shimabukuro playing a stringed instrument, the beautiful instrument that you have seen him holding is, in fact, a ukulele. It’s also true that he is from Hawaii.

A newbie may think of the soprano as the smallest ukulele in the uke family, however, that’s not completely true. That’s because there’s another ukulele that’s smaller than that. Yes, I’m talking about the Sopranino ukulele that comes with a length of 32cm after Tenor Ukulele.

Now, as for the pronunciation part. If you’re from Hawaii or love the Hawaiian culture, you could call oo-koo-leh-leh, or else you-koo-lay-lee would be just fine. If you ask me what I like to call it, I prefer the latter one and that’s the reason why I use the ‘a’ article, and not the ‘an’. Don’t judge me—this doesn’t imply I’m a Grammar Nazi.

Although some newcomers may mistake uke for a guitar, there lie differences that make each other poles apart, and that’s what we’ll shed light on in this comprehensive article, starting with the first difference.

Let’s admit it—no one can forget the hurts that are caused in the fingertips by using the guitars regularly because of the hard strings. However, that’s not something that people will need to struggle with because ukuleles boast super-soft nylon strings that feel as soft as a piece of cloth (not as cotton, though) when you run your fingers through them.

Since its size is small and wrist tension is way less, learning to play ukulele becomes a piece of cake for beginners.

How about taking your ukulele to one of your most favorite places in next to no time? Do you think you could do that?

Well, certainly, you could, thanks to the small size. Not only does small size makes a uke easier to be taken from one place to another but also it becomes super easy to hold in hands.

Rest assured—the baritone ukulele is made for people with larger hands.

Is a ukulele entry-level friendly?

Put differently, will owning a uke make you break the bank?

This is important, especially the beginners. It is so because spending way many bucks, in the beginning, is not ideal, and our experts suggest that a beginner should get their hands on an entry-level ukulele under $100 or something akin to that.

Anyway, speaking of the pricing, you can easily get to have uke for just $50 to $70 without hurting yourself financially. So, yes—owning a ukulele won’t cost too much.

Ukulele is easy and fun! And, that’s something even a novice uke player can say. We’ve seen that people find the ukulele friendlier while spending time with their mates as compared to a guitar because the uke is lightweight, small, and easier to hold.

There’s something else that makes it easily accessible to anyone i.e. it only features four strings. Unlike guitars that typically have 6 strings, ukuleles only feature 4.

That means anyone can start playing it on the go without having any special skills or knowledge.

When it comes to sound production, ukuleles are clearly a winner. They produce warm, rich, and bright tones that bring a smile to the lips of the person playing it.

No matter whether you’ve thrown a night party with your mates or it is your birthday, the ukulele is a game-changer because you could play a variety of genres like a PRO on it. Also, depending on the ukulele type, you would definitely notice some difference in the sound. Therefore, it is advisable to consider what type of uke you actually need.

If you think you’re having difficulty playing the chords, paring down the complex chords could be helpful.

Both ukulele and guitars are great stringed instruments and have been used by Grammy winners and even Oscar-winning artists. However, when it comes to comparing them with each other, you can’t ignore the fact that the ukulele turns out to be a winner in different aspects, be it affordability, portability, or ease of playing.

But that doesn’t make the guitar a bad person—the need for a guitar can’t be fulfilled using a ukulele, and that’s something you need to understand. So, if you want all to get the most out of the aforesaid considerations, owning a uke, undoubtedly, is a great idea for you.

And, since our take on ukuleles is always up for grabs, we suggest you make the most out of the ukulele advice and become a better uke player.

Let me know in the comments.