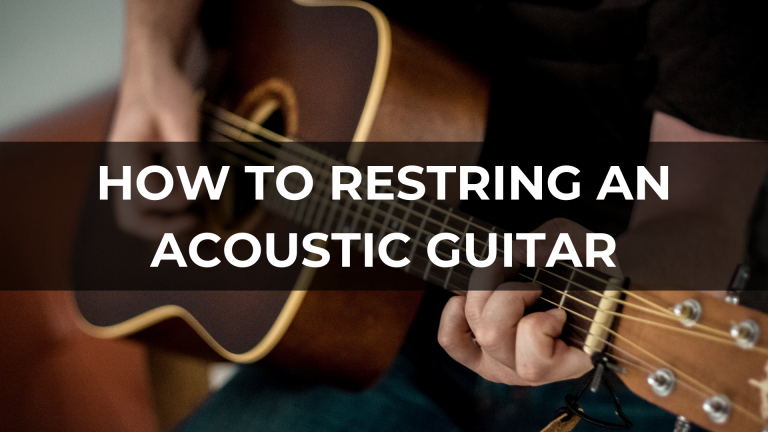 Strings affect how a guitar sounds more predominantly than any other aspect of it. A good set of strings can make a regular guitar sound expensive and high-end. They are considerably cheaper too, making it easy to experiment. In this article, you’ll gain a basic idea about everything you’d need to know about acoustic guitar strings and how to change them, of course.

Things you will need to change the strings:

How to Change Acoustic Guitar strings

It is recommended u don’t replace all guitar strings at once and do it one by one. It will help you avoid misplacing the pins and also help in the ordered placement of strings. It won’t cause a pressure indifference problem at the headstock as the common rumours suggest unless you have pickups It will keep the new and old strings organised. a good way to go about is from the thickest to the thinner strings

Steps to Restring an Acoustic Guitar:

Important Factors to know about an Acoustic Guitar String

There is a solid core wire beneath the outer winding of the strings. This wire can be of two types: round-core or hex-core.

The first guitar string cores were all made round until 1980s and then D’Addario introduced hex strings to the market. In a short time, hex cores became the industry standard for the majority of manufacturers.

The reason for the popularity of hex cores is that their sharp edges grip the outer wire very well, which prevents slippage. The hex shape also allowed to make machine winding more accurate and consistent. hexagonal shape in the core improves tuning stability, flexibility, and reduce string breakage, compared to round core strings Partly due to their inconsistency, round-core strings are very commonly assembled by hand nowadays

A flat wind is used to create a string with a smooth surface. Flatwound strings give a warmer sound and have a longer life. less grip makes it harder for bending, and generally cause less fret and fretboard wear and less suitable for picking. These strings are generally better for jazz and blues artists. due to the less surface area and the flat surface, it makes it harder to collect dirt and moisture and prolongs the life of the strings.

Round wind is used to create a string with bumps to provide a textured surface. Roundwound strings typically have a shorter life, lower tension, brighter sound, longer sustain of sound notes and better grip for bending and cause more fret and fretboard wear. These strings are more suitable for music like rock n roll.

Halfwound strings are a mix of the previous two techniques, with the round wire flattened only partially. They are made by winding a round wire around a hexagonal core and then polishing the surface into semi-flat form. This enables a better grip than flat wound strings but saves from all the squeaking and is comparatively easier on the fingers.

Professional and high-end musicians have also tried alloyed combinations of gold and titanium to fight corrosion in their strings but since it is a metal coat, they provide crisp and clean tones and do not dull over a short period of time.

The size of the gauge (diameter) plays an important role in the sounds produced by a guitar. We’ll take a look at some of the commonly available options in the market. The numbers on the package indicate the size of the strings i.e a 10s would mean a 0.010-inch diameter

10s: are extra light string.10s are typically the lightest gauged acoustic guitar strings and because they’re so light, they produce a bright and punchy tone. Easy to do fretting and bend notes as they aren’t as rigid  Typically used on small-sized guitars will not work very well on big ones.

11s-Often referred to as custom light strings, they give a bright, punchy tone. Also, a great option for beginners, as they are easy to push down and bend. When used on big guitars, they can provide quite a pleasing lead tone.

Although 10s and 11s are prone to breakage and buzzing. Their lightweight makes them suitable for old vintage guitars and necks with low strength and suitable for fingerpicking and producing treble notes.

14s: typically, the thickest gauged strings you might come across for acoustic guitars are these heavy gauged strings. These strings are designed to accommodate large guitars such as dreadnoughts and auditorium guitars. Producing a big accentuated bassy sound and heavy strumming, they can resonate throughout an entire room

That’s all for this post. We would encourage you to try out strings from different brands, materials and sizes. And to definitely try changing your strings by yourself, the worst that can happen is having to buy a new set of strings. Until next time, Happy shedding!