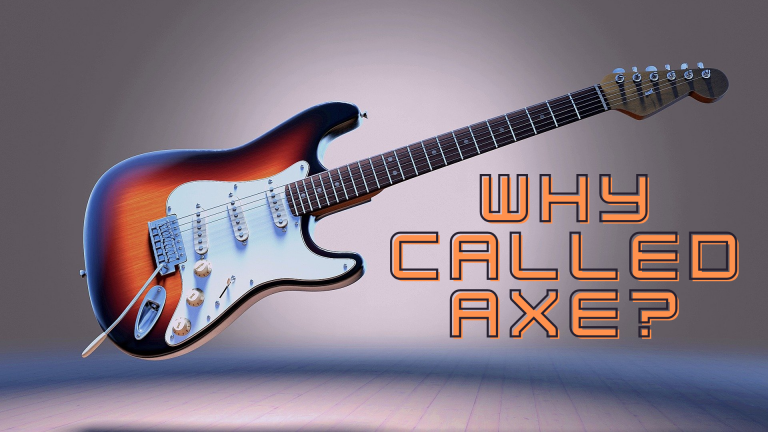 The origins and theories of why the guitar is called an axe are as amusing and entertaining as they can get. Let’s delve into it.

While many speculate that the slang might have caught up from repeated occurrences of popular rock stars smashing their guitars on the stage, as a symbolic savagery ending act, history also suggests otherwise. There’s actually a lot of slang associated with guitars and axes ranging from guitarists referring to themselves as axemen and calling their practice time “woodshedding” and “shred” meaning fast and impressive playing.

Back in the early days of jazz and blues when musicians wanted secluded places to practice their craft, they often went to the woodsheds so as to save residential neighbourhoods from loud noise, often also used as a taunt to refer to being a beginner’s practice session.

It is also probably why a lot of the terms have an association with wood sheds such as “practicing chops” and “shedding or woodshedding”.Chops refer to the ability of a guitarist to hit high notes and shedding refers to the deliberate focused practice of instruments

Another popular analogy that floats, would be the rhyming words ‘sax’(referring to saxophone) and ‘axe’ since saxophones and trumpets were similar in shape and more popularly established back then, it eventually caught up with other musicians and onto guitarists and over time non-musical instruments such as pens and typewriters were also referred to as an axe.

Whatever the origins, the terms gained true popularity around the 1960s from rock music gaining a large following. The rock stars and “hippies” usually slung their guitars over the shoulders and flung them in style after performances. The unintentional guitar-breaking accident by Pete Townshend created huge waves and has been followed religiously by a lot of the industry’s folk, the most popular guitar-breaking incidents.

Let’s take a look at the popular ones:

Repetitive acts showcasing guitars and other instruments as weapons of destruction and tools of battle-ish because axemen are considered to be powerful men full of wrath and it pretty much represented what the rock-n-roll stars were looking, as innuendo that guitars made them feel powerful, bold and fearless. The slang is usually used within the rock and heavy metal communities, who often like to view themselves as the modern barbarians and Vikings.

More story to the guitar breakings fiascos and aftermath:

While most guitarists learnt eventually to not have emotional sentiments towards their guitars, there is a fair share of musicians that later get their instruments repaired and reuse or make artwork pieces. there have also been fiascos of musicians regretting the damage caused under over-excitement and pumping concert madness and have spent a fortune getting their stuff reconstructed. some extremes include rehabilitation centre sign-ups for the trauma after their long tours.

Others like Slash from ‘guns n Roses and Velvet Revolver’, chose a smarter path that would entertain their fans and that wouldn’t cause a hole in their pockets-to use cheap or duplicates of their cherished guitars! Many of the stars have admitted to using original, valuable first-hand guitars to play the music and using the cheap copies for the on-stage beating and smashing- to keep on the traditions also because the rigged guitars and amps were just easier to break and destroy and served better gratification for the public.

Also, why would you ruin something that you have practised with, for several years or even decades for the muse of a crowd? Musicians are incredibly attached to their instruments and want to hoard them as souvenirs and memories.

Some of the obvious initial reasons to call guitar an axe could be the same use of materials in both of them. some fans also argue that axes and guitars have the same shape- a long wooden pole acting as the handle attached to a wide body(the body in olden guitars was narrow). Both are tools associated with their respective crafts. The term “axe” has been used to describe any tool or instrument used to hone their talent.

Fun fact: the French call their guitars “Pelle” meaning shovel and the Finnish call it a spear! So I guess the term might have just been a goofy word used by large groups of people and gained huge popularity and stayed.

Slang experts have made certain connections of blue and jazz terms to the slangs used in illegal lottery businesses of 1930s.mobsters used the word ‘axe’ to refer to their machine guns .musicians that had ties with the mobs or wanted that edgy and cool aura in their personality began using the slang.

While many musicians call their guitars and bass axes, one musician actually trademarked a guitar that was in the shape of an axe. Gene Simmons popular for his on-stage fire-spitting and outrageous costumes, sequin designs and makeup, renowned bass player of the KISS band. he designed a prototype of a bass guitar in the shape of an axe, from a few luthiers including carr and Jim cara and Kramer. Jim cara was hired to make a golden axe!

It soon became the band’s trademark and was remodelled several times throughout his career. His idea of trademarking the bass and later the guitar, was based on the popular philosophy that a guitar should be handled like a weapon and gained huge popularity amongst the metal and rock community and is probably the most distinguished guitar to have existed. So much, that merchandising was available and museums were built.

Change in attitude amongst the newcomers:

The recent musicians including the rockstars have tried to re-represent their community as polite, respectful and well mannered hence somewhat lowering the cases of guitar and saxophone smashings. Thus slowly changing the image of rockstars and metalheads as dirty barbaric guitar-breaking and hotel-thrashing bunch to a decent set of respectable musicians.

Definite contributions to the cutback have also been the decline in rock music enthusiasts and the musicians not being able to afford to destroy their six-strings (yep, another slang for guitars) because there is lesser money in the rock industry than what used to be and most musicians hardly make a living. In which case destroying instruments bought with livelihood savings for showing off would be daffy.

Whatever the source, the term axe and axemen is now popularly used as a term of respect amongst cult followers to describe their favourite saxophonists and guitarists or musicians in general. It is now a term usually used to affectionately refer to the lead of a band or a really talented legendary musician.

But the bigger difference has been the change in attitude amongst the upcoming generation of musician. Although the millennial generation thinks of the slang as very outdated, cheesy, corny and neanderthal, the term axe can still be heard from a lot of guitarists and followers as a synonym. We hope you liked the etymology show we put up for you.